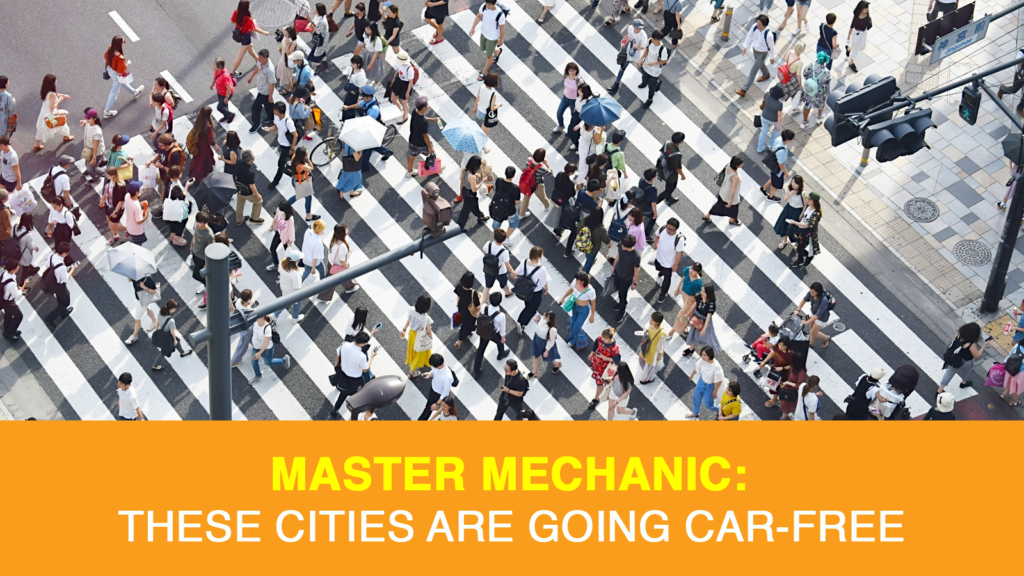 At Master Mechanic, we’ve seen a growing interest around green transportation options from our customers. With climate change on the tip of everyone’s tongue, public interest has ushered in a wave of change in all industries, and automotive is no exception. Major cities around the world are jam-packed with cars which pose a threat to environmental and public health. Increasing populations are also increasing the need for transit reform.
To see what might be coming next, Master Mechanic looked at three cities making significant changes to the way their residents get around. Let’s take a look at the current leaders in green, pedestrian-centric transportation options.

In Oslo, residents have traded parking spaces for bike and walking lanes so you might want to think twice about renting a car if you plan on visiting any time soon. Their approach to transportation reform dates back to the eighties where a massive initiative led to making the city more accessible without the use of cars. An initial motion to ban the use of cars entirely met public objection. Naturally, business owners raised concerns about lost profits with lower traffic funneling towards their stores. The motion was repealed with a gentler approach: removing over 700 parking spaces across the city to discourage daily commuters from using a car. For those parking spaces that remain, priority is given to electric vehicle drivers and residents with disabilities. Designated times for delivery vehicles have also been implemented. The changes have led to more residents walking and biking which in turn, has freed space on public transit.

In Madrid, the city has taken a different approach to reduce the number of cars on the road. Strict legislation around the use of vehicles, as a response to air pollution and traffic issues, created an almost immediate 32% decrease in the number of cars on the road in Central Madrid. The key to their success? For the vehicles still allowed on the road, the city focused on banning vehicles that were older and caused more pollution. These vehicles have been restricted to the city center and priority has been given to emergency vehicles and transportation for the disabled. Those vehicles who are permitted in the city are required to drive no faster than 70kmph and regular police checks keep an eye out for environmental stickers on cars. This approach may sound a little extreme, but the numbers speak for themselves.

Although beautiful, Beijing is well known for air pollution and smog caused by automotive emissions in the country. With China being the most populated country in the world, curbing the use of motor vehicles on the road is a priority to help put an end to the cloudy skies and difficult breathing conditions. In Beijing, getting your Driving Permit begins with becoming part of a public lottery. Even if selected, these permits are only valid for driving on certain days of the week. There are also financial incentives to those who choose to not drive on particular days. For some cities, the reality of driving is a part of everyday life. For places like Beijing, scheduling the driving time of its civilians seems to be a happy middle point. These solutions are meant to immediately help the current transportation crisis in the city and lower emissions.

What Can Cities Do to Reduce the Use of Vehicles on the Road?

The need to reduce cars on the road is a global issue with two significant opportunities for change: limiting vehicles and providing alternative options for transportation. According to the UN, our planet will reach upwards of 9.7 billion people by 2050. Naturally, cities must adjust as we look ahead to our largely populated planet over the next 30 years. The cities we explored all shared a few common approaches to transit reform that appear to be working and other cities considering a change should take note.

These are just a few ways cities are addressing what needs to be a global initiative. With leaders making effective changes to the public use of cars, the world has a few successful examples to follow.

If you have any concerns about your car’s emissions don’t hesitate to contact your local Master Mechanic today! We’re always happy to help.