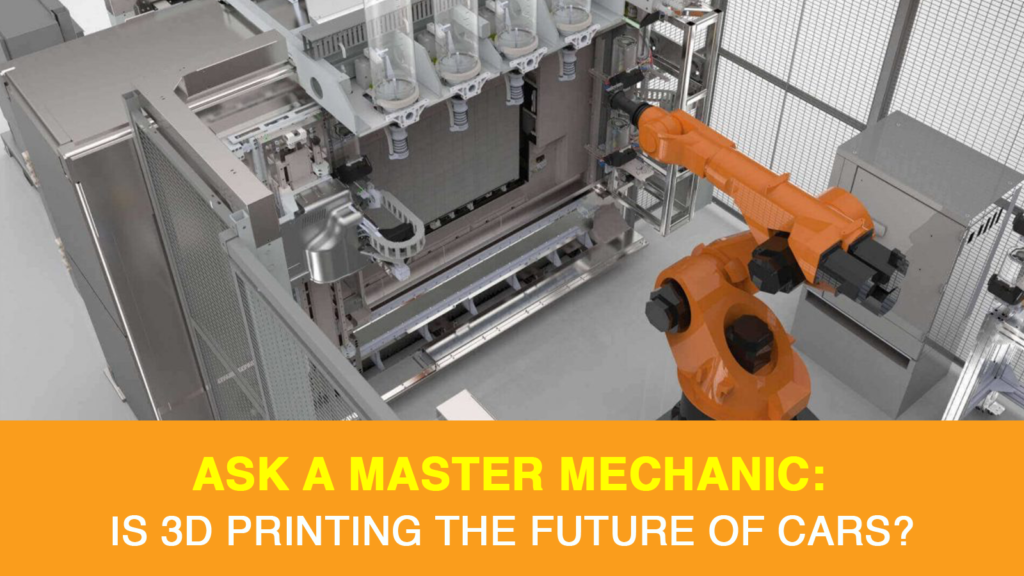 At Master Mechanic, we’ve seen some incredible advancements in car technology over the years. Is 3D printing the next big thing? It sure looks that way. A decade ago, 3D printing was a novelty. It certainly wasn’t something big automakers were investing in–or even looking at. Now, 3D printers are available at mass and being adopted by almost every industry.

Making the manufacturing process more efficient and more affordable has always been the aim of all automakers (and businesses). Making lightweight parts was also the goal of luxury automakers long before 3D printing came along. 3D printing just so happens to accomplish all of the above.

It’s no surprise then that Ford recently announced plans to start 3D printing large-scale car parts using a Stratasys Infinite Build 3D Printer. The Stratasys Infinite is a 3D printer the size of a room that can print car parts of any scale. That includes a bumper or a six-foot spoiler. Shifts like this in manufacturing could mean significant savings for automakers and consumers alike.

Is 3D Printing Better for Consumers and Automakers?

If you include depreciation, owning your own vehicle costs between $8,600 and $13,000 a year. That can make car ownership difficult for many families that need one. 3D printing could help reduce auto prices, and repair costs, making cars more affordable to own and maintain.

3D printed car parts weigh less than their metal counterparts. That means that a full tank of gas can go further. This could mean huge things for the electric car industry. The limited range of electric vehicles has been a major hurdle in their mass adoption. 3D printing could help make these cars lighter, improving fuel efficiency and extending their range.

The motivation for automakers is the hope of streamlining the design of new models or car parts. GM executives recently showed off a 3D-printed stainless-steel seat bracket. Using traditional techniques, the part would require eight components and several suppliers to create. With a 3D printing system, the seat bracket consists of one piece. That single piece is also 40% lighter and 20% stronger.

The Downside of 3D Printing

This all sounds very positive. But are there downsides to 3D printing cars? Yes. There are quality concerns or at least skepticism from consumers. When purchasing a heavy-duty vehicle, safety is one of the highest priorities for drivers. Some consumers perceive 3D printing as cutting corners, and they’re not necessarily wrong.

There are also environmental concerns. Although 3D printing seems to help with fuel efficiency in cars, the printers are notorious for consuming energy and releasing emissions. It’s unclear if the benefits outweigh the impact. With bigger companies like GM and Ford implementing the technology, hopefully, we’ll see printing techniques improve.

Although GM and Ford seem to be leading the pack when it comes to the early adoption of 3D printing, we’ll continue to see it play a big role in the automobile industry over the next decade.

As always, if you have any questions or concerns about your car, don’t hesitate to reach out to your local Master Mechanic. We’re always happy to help!

< Will Porsche Use Blockchain to Protect Customer Data?